In 1954 before rock ‘n’ roll ruled, before the T-Birds were the coolest in the school, four fed-up, outcasts dare to have fun on their own terms, sparking a moral panic that will change Rydell High forever.

The 1978 film Grease held the title of highest-grossing live-action musical movie of all time before Disney launched its mega-musical movie franchise, starting with Beauty and the Beast.

The prequel series focuses on new characters not younger versions of Rizzo, Frenchy, Marty and Jan, the four Pink Ladies from Grease.

Frenchy: What do you guys think of Sandy? Do you think we can let her into the Pink Ladies?

Rizzo: Nah, she looks too pure to be pink!

Originally intended for HBO Max, the series moved to Paramount +

The prequel series helped fundraise for the Greater Vancouver Food Bank in the Reel Thanksgiving Challenge 2021 ahead of the start of filming in early 2022. 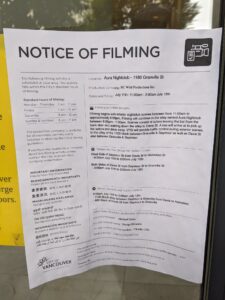