Adele Lim’s big raunchy movie JFC, about four Asian-American women searching for one of their birth mothers in all the wrong places, is back in Vancouver for three days of additional photography.

We’re fully leaning into a side of Asian-ness the world doesn’t usually get to see… the messy, R-rated, thirsty AF side. — Director Adele Lim.

Remember its R-rated makeover of the Fletcher Park playground in Maple Ridge?

Not sure what movie this is going to be in, but I’d probably see it… #bcfilm @yvrshoots pic.twitter.com/QMHBo0cgRG

The comedy follows four Asian-American women as they travel through Asia in search of one of their birth mothers. Along the way, their experience will become one of bonding, friendship, belonging and no-holds-barred debauchery that reveals the universal truth of what it means to know and love who you are..

LAST DAY OF PRINCIPAL PHOTOGRAPHY. On Day 1 I put my visual deck up on the wall and crossed out each set piece when we were done. Still can’t believe my 3rd world Azn ass got to direct a studio movie. It’s been a wild 34 days of shooting with a KILLER crew and a cast NO ONE IS READY FOR. Can’t wait to share on the other side.

THANK YOU BUDDHA  this movie is the first of its kind. PERIOD. asian female director. asian female writers. asian female leads, just living their best lives and being 100% unapologetic.[Adele Lim] is a badass queen and i’m thrilled to be in her directorial debut. WHAT A DREAM. [Cherry Chevapravatdumrong and Teresa Hsiao,]  killed this script. mad love to [Point Grey Pictures and Lionsgate] for believing in us. i’m so ready for y’all to watch us change the game. [Ashley Park] my on-screen BFF, LET’S FUCKIN’ GOOOOO!

It <Is> All Yellow y’all! .
I am so excited to get Rated R Raunchy and cuddly with [Ashley Park + Sherry Cola] guided by our fearless lady leaders [Adele Lim, Teresa Hsiao. Cherry, Chevapravatdumrong ]. It’s about to get a little nasty and I think you will like the stank  .

JFC has some men in the cast:

Ashley Park on Day One.

Sherry Cola on set on Day One. 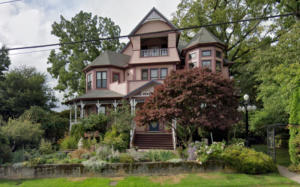