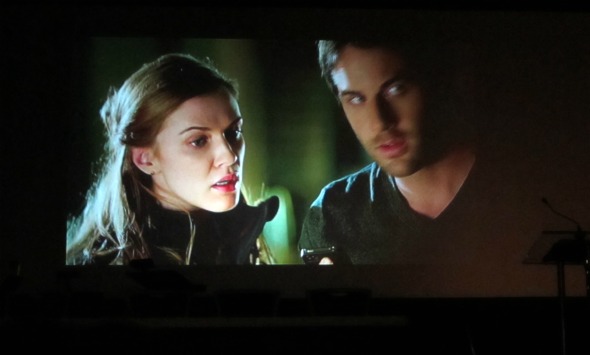 Five months ago, InnerSPACE hosts Teddy Wilson, Ajay Fry and Cynthia Loyst introduced this North American spinoff of the popular Brit series Primeval to an enthusiastic genre audience at Vancouver Fan Expo. Back then, co-showrunner Martin Wood described the Vancouver series as a cop drama, but with dinosaurs as the crooks of the week. Very very large crooks. These anomalies suddenly appear and create havoc in our neighbourhoods like downtown Vancouver, Stanley Park, the Olympic Village, Thunderbird Arena at  the University of British Columbia and even a local Canadian Tire store.

And our dinosaurs are even more kickass than the British ones thanks to visual effects whiz Mark Savela. See the new trailer.

So the Hunt is On, with Sara Canning as animal predator expert Dylan Weir and Niall Matter as team leader Evan Cross.