Where Has CULT Been? Tying Up Rush-Hour Traffic in Langley With A Stop-and-Stare Scene for 1×03

At 4 p.m. today, I saw a @News1130Radio Traffic Tweet:  “Everyone slowing down @232nd to look at the movie trailers @ on side of the… Read More »Where Has CULT Been? Tying Up Rush-Hour Traffic in Langley With A Stop-and-Stare Scene for 1×03 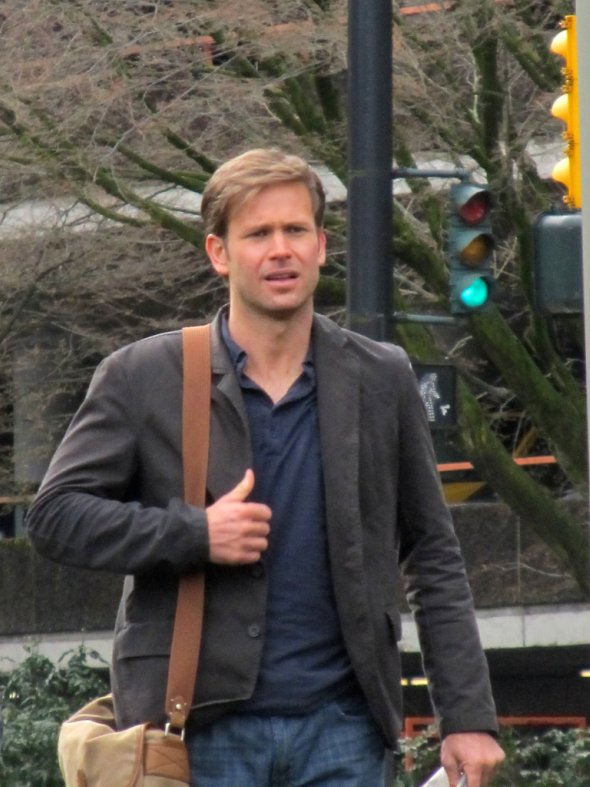 Matt Davis took time out of playing history teacher/guardian Alaric on The CW’s hit show The Vampire Diaries to film the pilot Cult in Vancouver in March. Even for a pilot, it was a relatively-short nine day shoot, which wrapped last Thursday night so that Davis could be back in Mystic Falls on the Atlanta set of The Vampire Diaries by Friday.

In this meta pilot, Matt Davis is a blogger named Jeff investigating the rabid fans of a cult horror TV show who have taken the series too literally. But relax, TVD fans. Even if picked up, Cult will be a short, 13-episode series, leaving room for Davis to return to Vampire Diaries. In other words, this pilot doesn’t mean the death of Alaric. Although it might.

I found Matt Davis — looking far too fine for a typical blogger — filming a scene on the pilot’s first day of shooting, March 20th, in Victory Square in downtown Vancouver.

From Victory Square in the morning, Cult moved production that afternoon into an empty heritage bank building with a glorious stained-glass ceiling on Pender Street, the same building that Supernatural turned into a vampire nest.

After this downtown sighting, Matt Davis fans looked for him on location but couldn’t find him. Some had better luck tracking him out and about enjoying Vancouver, which he tweeted about falling in love with –“Dear Vancouver, In spite of your rain, I think I may love you…. The only thing missing here is my Vampire Diaries family.” He then demanded that The Vampire Diaries return to the city where it shot its pilot — “#ByThePowerOfGreySkull!!!!!! I command the CW to move TVD back to Vancouver!!!!” And later Davis reunited with David Anders and Sara Canning here (Anders was in town guest-starring on Once Upon a Time and Canning is the lead of a new series Primeval: New World).

I didn’t find Cult again on location until its last day of filming, March 29th, when crew shot some scenes of Matt Davis sitting at the bar and at the window of the Alibi Room in Gastown. A film notice suggested that the last scene Read More »Matt Davis Has Wrapped Filming TV Pilot CULT in Vancouver