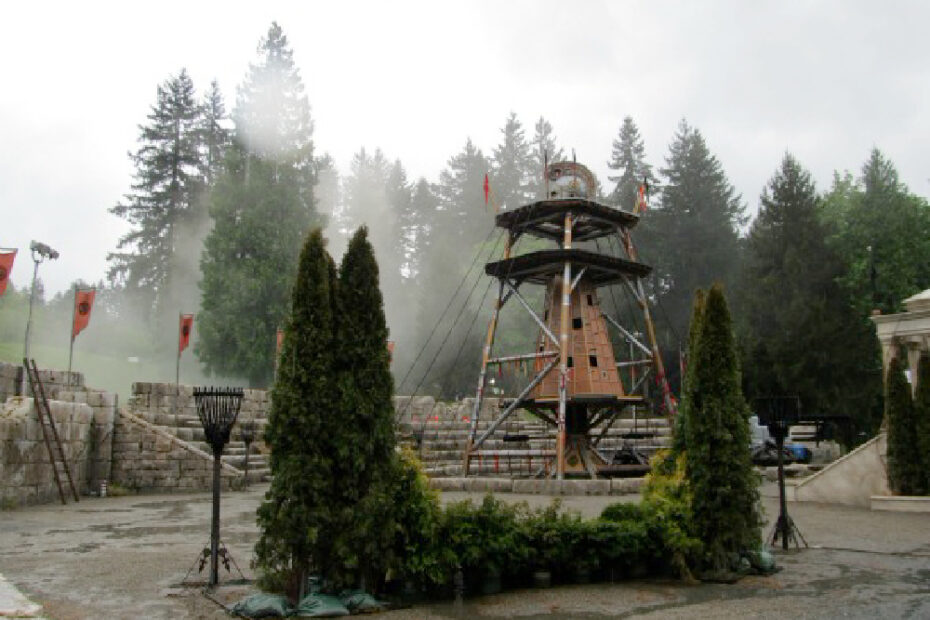 Tuesday in Vancouver started out sunny but by the time I reached the Percy Jackson: Sea of Monsters set in Robert Burnaby Park, a huge black cloud had covered the suburb of Burnaby and unleashed a torrential downpour. And I mean torrential — as in rain-bouncing-a-foot-high-off-the-pavement-of-Edmonds-Street torrential.

That didn’t deter a dozen fans sheltering under a tree next to the Camp Half-Blood set. Nor did the smoke machines which filled the air with their acrid smell and obscured the actors they came to see. When I stripped out most of the smoke from my photographs taken from about a soccer field away, I spotted Brandon T. Jackson and the dreadlocks of Douglas Smith at the back of the communal table in the mess hall. Alexandra Daddario must have been on set too and Logan Lerman could be the blue-shirted guy at the front of the communal table, judging from the stamina of the fans. They sure do love their Percy Jackson, as I’ve discovered from so many asking me for sightings of the actor Logan Lerman on set and downtown.

Percy Jackson and his friends head into the Sea of Monsters to find the mythical Golden Fleece and save Camp Half-Blood from attack by monsters in the second in the Percy Jackson and the Olympians franchise, a series of adventures based on Greek mythology.