In recent years, San Diego Comic-Con has become less about blockbuster movies and more about cult television series, many of which have been upgraded from… Read More »Upcoming Vancouver-Shot Movies BREAKING DAWN 2, ELYSIUM, MAN OF STEEL at Comic-Con 2012 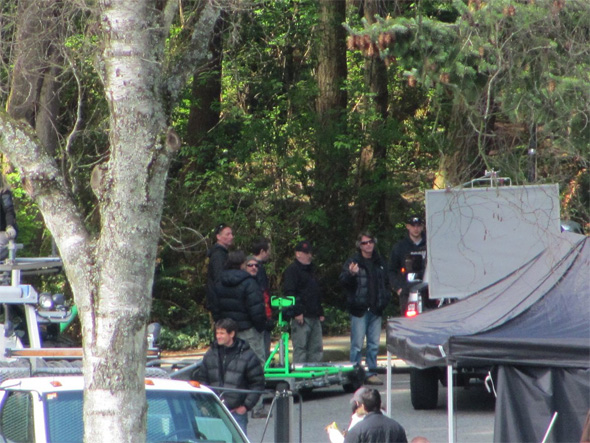 Published April 28, 2011 on Vancouver is Awesome

Popular romantic-vampire movie franchise The Twilight Saga is famous for a certain kind of hysterical fandom known as Twi-hards. During the ten weeks that Breaking Dawn, Parts 1 and 2, have been filming in the Vancouver area, I did encounter some unbalanced Twi-hards on Twitter but never heard of them disrupting production here. It would be too difficult.

Director Bill Conroy, producers and crew know how to foil fans and paparazzi from photographing and spoiling any scenes of the long-awaited union of teenage vampire Edward Cullen and his human beloved Bella Swan, played by real-life couple Robert Pattison and Kristen Stewart (Robsten). Earlier this month, huge white tarpaulins covered the backyard of the Cullen house set near Squamish, where the wedding scenes were filmed for consistent lighting but also to prevent aerial spoilers And roadblocks and armed police (including RCMP) surrounded the set to prevent spoilers from the ground. Some joked that security for this fictional wedding rivalled that of the Royal Wedding in London tomorrow.

I steered clear of Breaking Dawn location shoots until a week ago Monday when the second unit set up in Stanley Park on the interior road between the Vancouver Aquarium and Brockton Oval to film Kristen Stewart as newly-made vampire Bella doing fast vampire-running stunts on a greenscreen treadmill towed by a camera truck for Breaking Dawn 2. When I arrived near the aquarium, set containment crew had already erected a huge black screen at that end of the closed road but I did manage to take a few photos from Brockton Oval of the treadmill before set containment crew started putting up several 12×12 black screens at that end. As I was walking away across a football field, a containment worker with a big black umbrella came out to discourage me from taking any more photos, even of set containment units.

So you can imagine how security tightened close to Kristen Stewart’s afternoon call time. A dozen containment workers started patrolling the woods on either side of the closed road to prevent papparazzi and fans from photographing Stewart as Bella. One speedy pap — Justin King — did manage to evade them long enough to photograph Stewart from behind running on the treadmill (plus Bella’s never-seen-before wedding ring) before being chased out. And back at Brockton Oval, crew allowed some fans, including Christine Kilpatrick (@OLTV who offers On Location tours of Twilight sights) to watch Stewart running in her blue vampire dress on the treadmill shielded by a containment unit worker with an umbrella, as long as they kept their cameras in their pockets. I cannot stress how unprecedented this was to get to see cast at work.

Before any of the cast arrived in Vancouver in late February (Robert Pattison and Kristen Stewart flew in by private jet and would have gone unpapped if they hadn’t had to go through customs where several photographers waited), it seemed there would be opportunities to see some