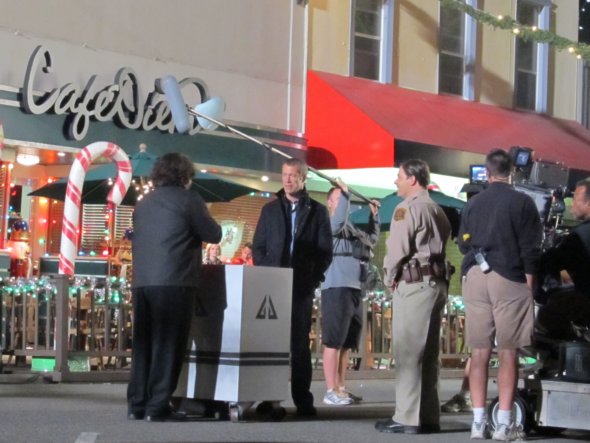 Published August 22, 2011 on Vancouver is Awesome

It sounds crazy to film Christmas TV in the summer heat but it happens every year. Of the more than a dozen Christmas-themed TV movies expected to air in the U.S. this December at least three filmed in Vancouver in July and August. And last week in Chilliwack, Syfy series Eureka filmed real scenes for its animated season five holiday episode called Do You See What I See?, laying out snow on a Christmas-decorated-to-the-max Wellington Street very early Thursday morning.

It took Eureka crew a couple of hours last Wednesday night to build Christmas, unloading trees with lights, garlands, candy canes, nutcrackers and a large snowman. The Euripedes statue/fountain in front of the Sheriff’s Office got its own Santa hat. After it was all done, I watched them shoot a key scene of Colin Ferguson as Sheriff Jack Carter, Kavan Smith as robot Deputy Andy and Chris Gautier as Cafe Diem chef gathered around a bright red holographic projector designed to create a faux winter wonderland on the street. Unfortunately, as often happens in Eureka, something goes array and thesuper photon generator sends a kaleidoscopic wave of holographic overlay from a video game that envelops the town leaving all its inhabitants animated. If you thought Eureka couldn’t get any quirkier, imagine your favourite characters as Looney-Toon cartoons, claymation or anime, as well as the more regular CGI. Apparently, our cartoon heroes have until Christmas morning to reverse it or remain animated forever.