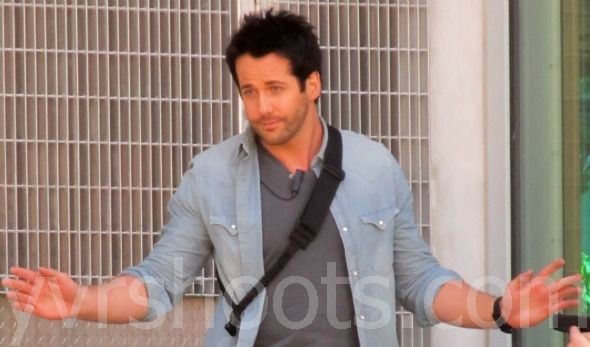 In the upcoming Vancouver-as-Vancouver series Primeval: New World, primeval creatures enter our city through temporal anomolies, aka time portals, and terrorize our neighbourhoods. One such dinosaur suddenly appeared in the Olympic Village last Thursday, chasing a jogger east from the Olympic Village pedestrian bridge to the Creekside Community Centre in take after take. It was a treat to watch the guy-in-the-grey-skin-suit-carrying-a-sphere (Chuck Campbell) who will become the computer-generated-dinosaur (an Albertosauras) following this actor-jogger until the jogger suddenly stops, looks behind him, yells “Holy Shit” and leaps over a bench to try to get away. Now that’s acting. I have a feeling he doesn’t make it since the last scene of the day was a crime scene behind the green Dragon Boat portable trailers.