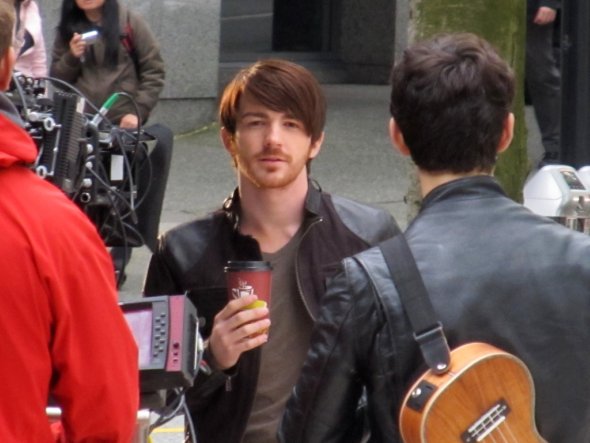 Published June 30, 2011 on Vancouver is Awesome

Hip hop fairy tale Rags looked more like a feature movie than a TV movie, with its dozens of prop New York taxi cabs cruising our downtown streets during its month of filming here. The Nickelodeon musical stars 17-year-old Keke Palmer, who also produces (backed by Mariah-Carey-husband and TeenNick chairman Nick Cannon), in a reverse-gender Cinderella story set in New York with teenage Max Schneider as her Cinder-fella, Charlie Prince. Is this Nickelodeon’s answer to the Disney smash High School Musical?

It could be, with the help of grownup Nickelodeon star Drake Bell of the popular Drake & Josh series in the cast: Bell (see the signature bangs below) is the current Nick heartthrob to Cinder-fella Max Schneider’s heartthrob-in-waiting. You might have spotted the actor Bell here last summer filming the upcoming live-action A Fairly Odd Movie: Grow up, Timmy Turner! Or you might have seen the just-turned-25-year-old musician Bell doing the rounds of New York morning shows this week, promoting his new 4-track EP — A Reminder — whose preview single Terrific recently topped the iTunes chart. I had no idea of Bell’s star power among the junior set until I uploaded this photo of him and Max Schneider (with his ukulele on his back) filming a Rags scene in Oceanic Plaza downtown.

During each take of the scene between Drake Bell and Max Schneider,