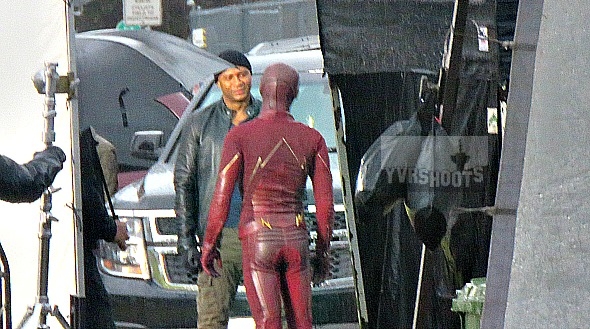 Updated May 5, 2013 – Emma and Neal/Baelfire were checking whether devious Tamara (Sonequa Martin Green) was out running as she claimed instead of holding Regina captive, as Emma suspected. I didn’t notice that I’d photographed her in a lycra hoodie below.

This is Michael Raymond-James’s “big scene on a rainy beach” with Jennifer Morrison yesterday on Third Beach in Stanley Park. Sorry Swanfire fans. This doesn’t look particular romantic  It seems Emma Swan  and her baby daddy Baelfire have some issues to work out.

Once Upon a Time spent Friday shooting scenes on the forest trails above Third Beach with horses on set but took time out to film the beach scene around “magic hour”. At least what passes for the last hour of sunlight on a rainy day. The scene took less than half-an-hour to shoot with production assistants stopping joggers and walkers at both ends of the seawall during filming.