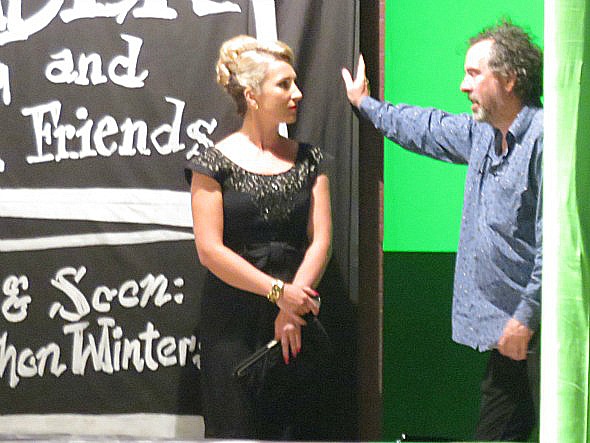 Tim Burton is a hands-on director and in constant motion on set. He talks to key background performers and crew over and over again, returning to discuss new details of the scene at last night’s shoot for his latest feature film, Big Eyes. Crew had dressed The Penthouse Night Club as the 1950s San Francisco night club The Hungry I for a week of filming. Last night’s establishing shot of background performers arriving and entering the club was the only exterior scene. A large crowd gathered opposite on Seymour Street  to watch the celebrity director in action and quip: Where’s Johnny Depp?

Big Eyes is a smaller, more intimate film for Tim Burton than his many collaborations with actor Johnny Depp: from Edward Scissorhands to Charlie and the Chocolate Factory to Sleepy Hollow to Sweeney Todd to Alice in Wonderland to Dark Shadows. The Weinstein company film is a biopic about the art world’s Margaret and Walter Keane (Amy Adams and Christoph Waltz). famous for 1950s and 1960s paintings of big-eyed children. And takes a look at why Walter Keane took credit  for all of his introverted wife’s work.

Oscar winner Christoph Waltz (Django Unchained, Inglourious Basterds) walked through set a couple of times last night on his way to and from the Penthouse but was not part of the exterior scene. Read More »SHOOT: Director Tim Burton Films BIG EYES at The Penthouse Night Club

PROMOS: MAN OF STEEL Trailer Plus Problem of No Fly in Super Suit

More is more when it comes to summer blockbusters. Promotion for the Man of Steel is in overdrive ahead of its release next Friday, June… Read More »PROMOS: MAN OF STEEL Trailer Plus Problem of No Fly in Super Suit