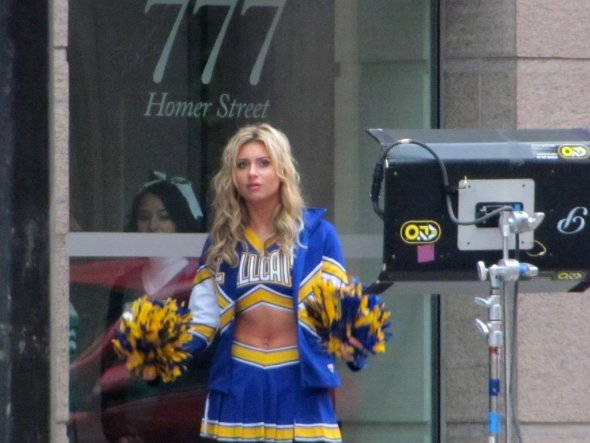 Published March 24, 2011 on Vancouver is Awesome

I do try to photograph at least part of each TV series filming in Vancouver but some are more difficult than others. The CW’s Smallville, whose cast and crew celebrated ten seasons here at a big wrap party at the Vancouver Club last Saturday, filmed on permanent private sets and rarely went on location in their final season. And the incredibly fit young stars of the CW’s Hellcats, who instantly topped the local paparazzi list of saleable celebrity shots in their first season, attract a pack of paps and autograph hounds to each location shoot, as well as their daily workouts.

At its core, Hellcats is the story of friendship between pre-law-student-turned-cheerleader -for-scholarship-money Marti, played by Aly Milchalka, and her roommate and fellow cheerleader the very-religious-and-sheltered Savannah, played by Ashley Tisdale, at the fictional Lancer University in Memphis, Tennessee. Throw in dance numbers in skimpy cheerleader uniforms and lots of hook-ups among the main characters and you get a demographic hit. CW executives gave an early full season order, announcing they were “thrilled that [it] paid off for us.”

After filming its pilot here in Vancouver last April, Hellcats returned to shoot the series from mid-summer to late winter, favouring locations at several local campuses, including BCIT, Simon Fraser University and the University of British Columbia. I first caught up with them filming an exterior scene on the UBC campus at the end of November with cameras forced to shoot with snow on the ground. Read More »BIG READ: HELLCATS Wrap First Season at The Centre