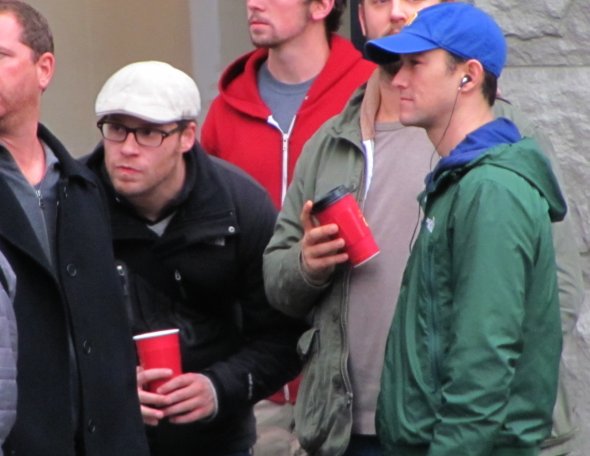 Published September 5, 2011 on Vancouver is Awesome.

Cancer dramedy 50/50, starring Joseph Gordon-Levitt as the twenty-something cancer patient given 50/50 odds of survival and Vancouver’s own Seth Rogen as his horndog best friend, makes its debut at the Toronto International Film Festival next Monday — with wide release at the end of the month. Filmed here after the Vancouver 2010 Winter Olympics, this small $8-million budget movie already has a reputation from advance screenings of charming people with laughs and then making them bawl like little children.

Seth Rogen developed and produced this buddy comedy, inspired by the true story of his comedy-writer friend Will Reiser’s extensive treatment after being diagnosed with a rare form of cancer six years ago. In real life and fiction, the two pals dealt with it the only way they knew how — through humour. Yet Reiser’s script doesn’t shy away from the more gruesome aspects of cancer like hair loss, chemotherapy and prematurely facing one’s own mortality — both the movie poster and trailer feature a buzzed-about scene of Joseph Gordon-Levitt (Inception) shaving his head.

Set in Seattle, the film also features Bryce Dallas Howard (in town this weekend to see her husband Seth Gabel of Fringe) as the girlfriend who can’t deal with her boyfriend’s cancer; Anna Kendrick (Up in the Air) as the therapist who grows into a relationship with her cancer patient; and Anjelica Huston as his worried mother. And if you’re looking for local actors, Matt Frewer and SGU: Stargate Universe alumni Julia Benson and Peter Kelamis are in some of the scenes.

I missed 50/50’s original five-week shoot in 2010 when the movie was called I’m with Cancer (later changed to Live With It and finally 50/50) but got to see Joseph Gordon-Levitt do reshoots of running scenes near Victory Square when he and Seth Rogen returned to the city for a day last November 1st.

The reshoots started that grey November day with Joseph Gordon-Levitt running along the seawall in Stanley Park near Lumberman’s Arch.