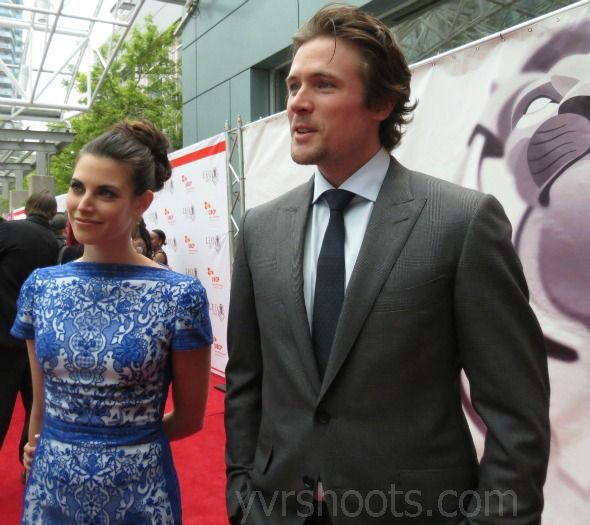 LEO AWARDS: Meghan Ory of ONCE UPON A TIME & INTELLIGENCE

It’s no surprise that Meghan Ory (Once Upon a Time & Intelligence) was the most photographed woman on the red carpet at Saturday’s Leo Awards, celebrating the best of B.C.-made film and television. While she came to support her nominated husband John Reardon, Ory is BC Film’s breakout star, vaulting from a supporting role as Ruby/Little Red on ABC’s Once Upon a Time to main cast on CBS’s upcoming series Intelligence. And trading Josh Dallas for Josh Holloway and a Vancouver production location for a Los Angeles one.

So there will be long-distance commuting in this couple’s future (who met 8 years ago on an independent film). Reardon, who’s supporting cast on Arctic Air, will start filming the aerial adventure series this August in Vancouver and Yellowknife. Ory says she hasn’t had a chance to visit him when he’s shooting above the Arctic Circle but wants to experience the beauty of the Northwest Territories. Still, that’s a very long way from L.A. When production starts, they’ll have to make do with odd weekends in either Vancouver or L.A. Luckily, Ory will return as Ruby/Little Red on Once Upon a Time here but says she doesn’t know when. Later rather than sooner?

Read More »LEO AWARDS: Meghan Ory of ONCE UPON A TIME & INTELLIGENCE