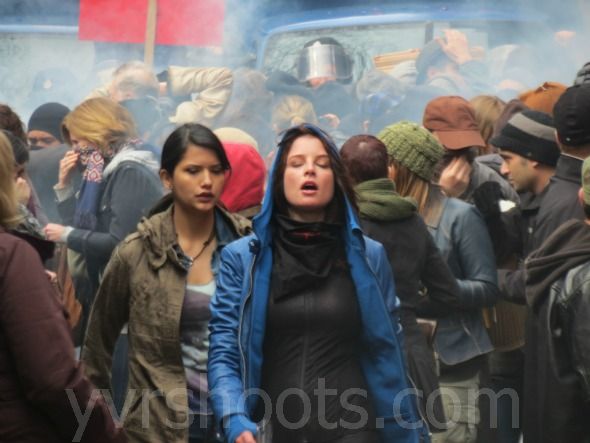 Continuum staged a big protest scene in Gastown’s Blood Alley today with Vancouver-cop-from-the-future Kiera Cameron (Rachel Nichols) shoved around in a crowd as hundreds of protester extras battled police extras in full riot gear. In one scene, Kiera ran out of the melee in her black high-tech cat suit, boots and a sky-blue jacket. But this was a rare sighting. Most of the time you couldn’t see her in the throng of up to 250 background performers.

Luckily, there’s another chance to see her at the Continuum panel at Fan Expo Vancouver this Saturday, April 20th, at Canada Place. Cast Rachel Nichols, Victor Webster, Erik Knudsen, Lexa Doig, Luvia Petersen, Stephen Lobo, Jennifer Spence and Omari Newton are scheduled to be there at noon in Ballroom A.  And fans are promised a sneak peek of season two, which premieres this Sunday, April 21st, at 9 p.m. on Showcase in Canada.