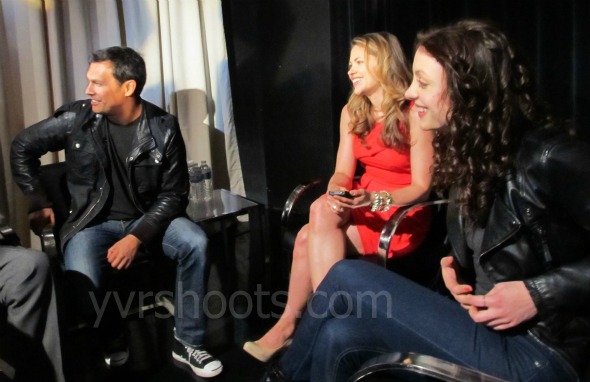 How much does the CBC love its new hit drama series Arctic Air? Heaps. At the CBC upfronts earlier this month in Toronto, Vancouver and Calgary to unveil next season’s schedule to advertisers and media, host George Stroumboulopoulos introduced the Arctic Air actors first in the opening Prime Time segment, ahead of the Dragon’s Den Dragons.

And for good reason — Arctic Air was the most-watched debut season for a CBC drama series in fifteen years, averaging just under a million viewers (965,000) for its first ten episodes. I watched all ten and even live-tweeted the finale in mid-March, along with so many other Canadians. Arctic Air is a classic adventure series — filmed mainly on permanent sets in Aldergrove with most exterior scenes filmed in Yellowknife  — where the main trio are often in peril. It started with Bobby Martin (Adam Beach)’s return to Yellowknife to help keep alive the maverick airline co-founded by his dead father and the notorious curmudgeon Mel Ivarson (Kevin McNulty). There he reunites with Mel’s daughter Krista (Pascale Hutton), a former flame and hot-shot pilot. In the season finale cliffhanger, much of it filmed near Clinton  in B.C.’s Cariboo country, Mel has internal bleeding after helping the other survivors of a plane crash.  What? “Mr. Crankypants better be with us next season,” I tweeted.