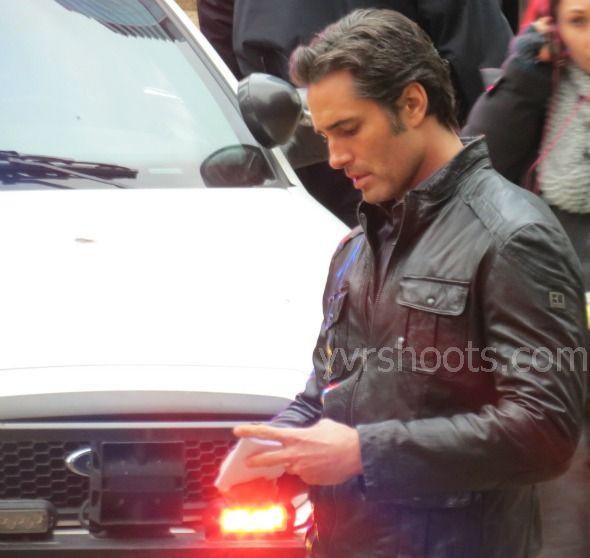 Rachel Nichols will hijack Continuum’s official Twitter account @ContinuumSeries at 3 p.m. PT today to answer any questions you may have about her cop-from-the-corporate future show now airing its first season on Syfy in the U.S. Continuum is about CPS officer Kiera Cameron who travels back in time from Vancouver in the year 2077 to Vancouver present-day, caught up in an escape by a group of terrorists — Liber8 — who plan to change the future from the past by targeting the corporations which will come to rule the world.

Continuum began to film its second season here a couple of weeks ago on its police station set at the Plaza of Nations downtown. Often on location, the show was then spotted in Vanier Park filming near the Burrard Bridge and later shooting a stunt-fight in the CBC Vancouver parking garage with Kiera Cameron (Rachel Nicols) in her black hi-tech cat suit. [Update: The following week, the New York Times paid a set visit to Squamish where Continuum was filming scenes involving a helicopter and a wind tunnel.]

On Monday, Kiera Cameron’s Vancouver police partner Carlos Fonnegra (Victor Webster) joined her at a crime scene in Robson Square at the iconic Vancouver Public Library (aka Fringe Division Headquarters for Fringe fans). Someone is shot at a press conference and the detective duo try to determine where the shot came from. I’m embarrassed to admit that three of us watching could end up as unfocused Lookyloos at the crime scene filmed by a steadi-cam crew circling  Nichols and Webster as they looked up at nearby rooftops. We wondered if we were in the camera shot but assumed we would have been asked to move. I like to think that I’m smarter about stuff like this on set, but apparently not.