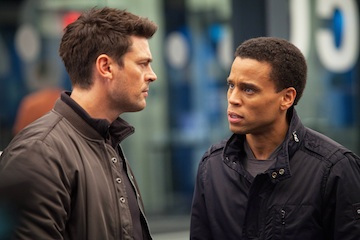 Vancouver-shot pilots have dominated San Diego Comic-Con’s Preview Night for years, largely because Warner Bros. Television has such a big presence here. 2013 is no exception with pilots Almost Human and The 100 and the New York-shot pilot The Tomorrow People — which has shifted production to Vancouver — all to be screened in Ballroom 20 on Wednesday night, July 17th.

Almost Human — Part-robot human Detective John Kennex and  part-human robot  Dorian are a buddy cop duo in future Los Angeles, where all cops must partner with androids known as synthetics.  The pilot was filmed all over  in Vancouver this past March in some familiar Fringe locations. It stars Karl Urban (John Kennex), Michael Ealy (Dorian), Minka Kelly, Mackenzie Crook, Michael Irby and Lili Taylor and is produced by uber-producer J.J. Abrams, Fringe showrunner J.H. Wyman and others. And if you miss the Wednesday night screening, you can catch the pilot at the Almost Human panel on Friday, July 19th, followed by a Q&A with cast and showrunners. The series begins filming in Vancouver after Comic-Con and FOX plans to debut it on Monday nights after the World Series, starting November 4th.

The 100— A nuclear apocalypse kills humanity on Earth but fortunately not everyone is on the ground. Twelve space stations are in orbit and come together to form the Ark. Read More »COMIC-CON SKED: Sneak Peeks of Pilots & Panels for ALMOST HUMAN, THE 100 & THE TOMORROW PEOPLE