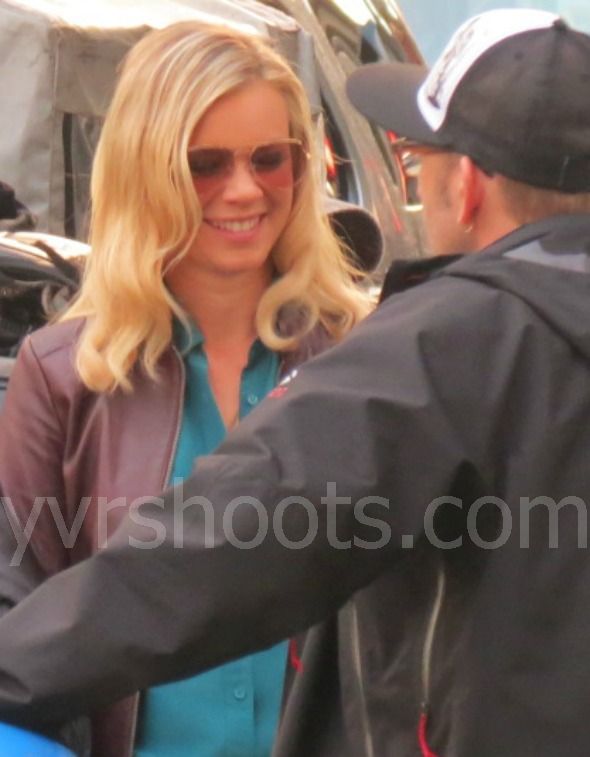 If you follow Brent Butt (Corner Gas/Hiccups) on Twitter then his feature film No Clue won’t be news to you. It took about three years to get into production and started filming in Vancouver two weeks ago. It’s big. And local. And it will be funny. No Clue is a “comedic mystery thriller” starring Butt as an in-over-his-head guy trying to figure out whodunit from a cast of suspects including Amy Smart, David Koechner, David Cubitt, Dustin Milligan, Dan Payne, and Kirsten Prout.

Brent Butt wrote the script, his production company Sparrow Media is producing it and Vancouver’s own Carl Bessai (Sisters & Brothers/Fathers & Sons) is directing it. I found No Clue at dusk yesterday wrapping a scene inside Finch’s Tea and Coffee House at West Pender and Homer and then moving across the intersection to the opposite corner to film the next scene.

A steadicam crew filmed Amy Smart (Shamelss/Scrubs) walking from the curb lane of West Pender, up onto the sidewalk and into the stone building on the corner. Then they took the cameras inside and filmed another scene of her coming into the building where Brent Butt was. I’m not sure if he was in the scene with Smart or on set in his role as writer/producer.