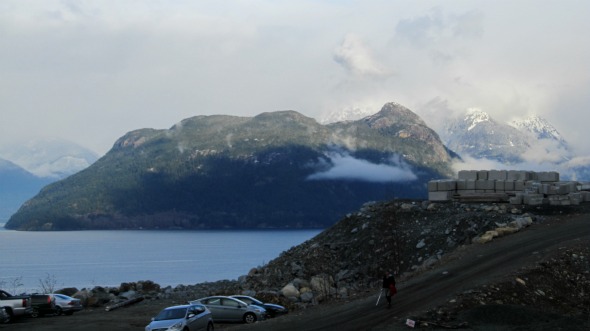 It’s not the first time Squamish has played Alaska for American TV. NBC pilot Midnight Sun, which Deadline.com says is getting some solid early buzz, spent much of last month filming in Squamish as Alaska.

This thriller about an FBI cult specialist investigating the mysterious disappearance of a group living on a commune in Squamish as Dugan, Alaska, stars Julia Stiles (the Bourne trilogy) as the cult specialist Leah Kafka, whose investigation uncovers a larger conspiracy, and Titus Welliver (Lost’s Man in Black) as cult leader Bennett Maxwell, the charistmatic and manipulative head of Midnight Sun.

I came close to seeing some of the filming of the Midnight Sun pilot, but arrived a day or two after they’d wrapped at the Squamish dock and then found them a couple more times at inaccessible locations. Luckily Michael Raymond-James, who co-stars as an Alaskan lawyer and second-in-command of the Dugan Police, is a tweeter and kept a sort-of running set diary with photos attached.

The cast did a network table read on March 8th. Then three days later, Raymond-James tweeted, “Prep is over. The hands have been shook, the drinks have been drunk. Tomorrow, we start shooting. Boom”. It looks like Midnight Sun started filming the pilot on the Squamish dock, judging from a photo which Raymond-James captioned “Look at where I go to work”. Unfortunately, I couldn’t get up to Squamish until Friday, March 16th, just missing the shoot there.

As you can see from the fresh snow above, the weather wasn’t co-operating much with the production. Glacier Air at the Squamish Municipal airport tweeted on March 14th about Midnight Sun not getting the sun they wanted to film a scene with a Beech 18 plane. The attached video showed a serious snow squall in progress. On March 16th, the day I was looking for Midnight Sun at the Squamish dock, someone from the crew tweeted a photo of a green screen Beech 18 scene, announcing “Today we get to fly!”

I returned to Squamish the following Monday, March 19th, spotting Midnight Sun’s GEP Pro production signs on the drive up the Sea to Sky highway, just past Lions Bay. Midnight Sun was filming in a private gravel pit, with nothing to see except a beautiful view of Anvil Island and a couple of prop Dugan Police suburbans parked nearby.

Michael Raymond-James had settled into on-location routine by then, tweeting “In my life me Tweeties, I’ve drank with rogues [sic] and revolutionaries. And now I can also say that I’ve done laundry in Squamish, BC.” Read More »NBC Pilot MIDNIGHT SUN Filmed in Squamish as Alaska