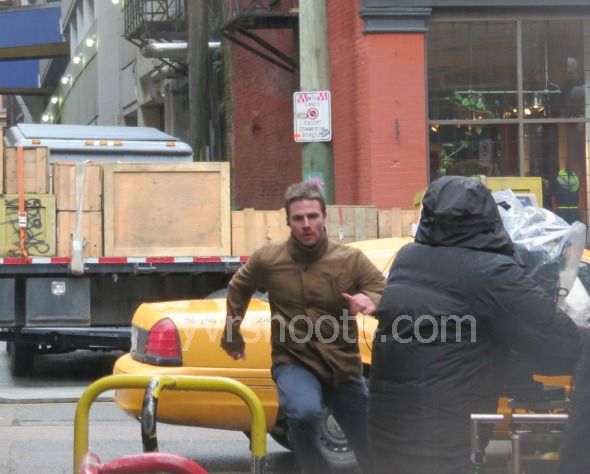 SHOOT: Watch ARROW’s Stephen Amell Jump to Street, Slide over Cab & Then Run Right At Me for 1×18

Stephen Amell could work as a stunt performer if he didn’t have a job already as the star of Arrow. His Oliver Queen/Hood stunt double Simon Burnett did the jump and running sequence first in Gastown  — jump from the roof of the grey van in the alley over a semi-trailer piled with plywood  crates onto the street, slide over the trunk of a yellow Starling City cab and run into the other side of the alley. Camera crew let me stand behind them to watch three or four takes with Simon Burnett and then the last one with Amell himself. Amell did the exact same sequence as well as Burnett but instead of coming to a halt just past the camera, Amell blasted by me down the alley. I could have snapped one more photo but risked him running right through me. Automatic set ban? For sure. This is not to take away anything from Simon Burnett. He’s the one who jumped from the Hotel Gastown roof to the top of a parkade. And he’s the one who smashes through candy glass windows feet first as the Hood. But Amell is simply amazing.

Read More »SHOOT: Watch ARROW’s Stephen Amell Jump to Street, Slide over Cab & Then Run Right At Me for 1×18