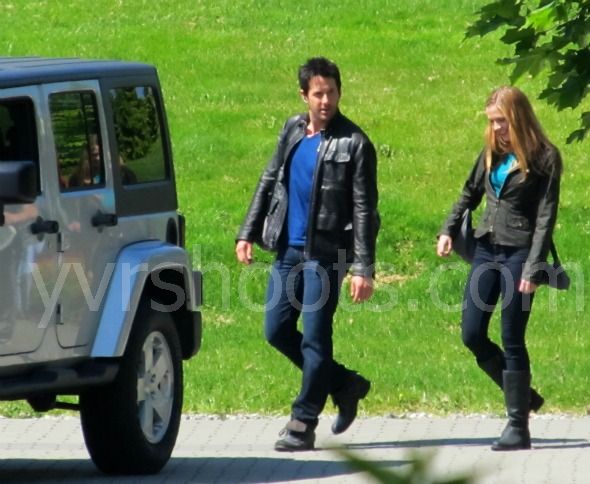 In the upcoming Vancouver-as-Vancouver series Primeval: New World, primeval creatures enter our city through temporal anomolies, aka time portals, and create havoc. This week a winged creature is terrorizing the University of British Columbia in and around the Doug Mitchell Thunderbird Sports Arena (venue for Vancouver 2010 Olympics hockey and Paralympics sledge hockey). Crew setting up a crime scene in the Thunderbird Parkade last Friday told me it’s some kind of flying dinosaur [Update: it’s our cheezy-lovin’ Leggy from the grow-op escaping from a government facility]. Of course I didn’t see the creature, which will be computer-generated in post-production, but I did spy Dan Payne and other military actors arriving on the west side of the Thunderbird Arena on Friday morning and evacuating student extras on the east side on Monday morning.

Like the original British series Primeval, the Vancouver spinoff has a team of smart minds and animal experts who battle these creatures. Ours is led by Niall Matter as rich Vancouver software genius Evan Cross, seen here arriving at the Thunderbird Arena with co-star Sara Canning as predatory animal attack behaviour expert Dylan Weir.

As tall Dan Payne evacuated student extras carrying hockey sticks from the arena, Niall Matter and Sara Canning filmed a scene of them getting out of their jeep, looking back at the scene and possibly up to the sky at a flying creature, grabbing their prop tranquilizer rifles Read More »PRIMEVAL: NEW WORLD’s “Leggy” Terrorizes UBC Thunderbird Arena This Week – Updated