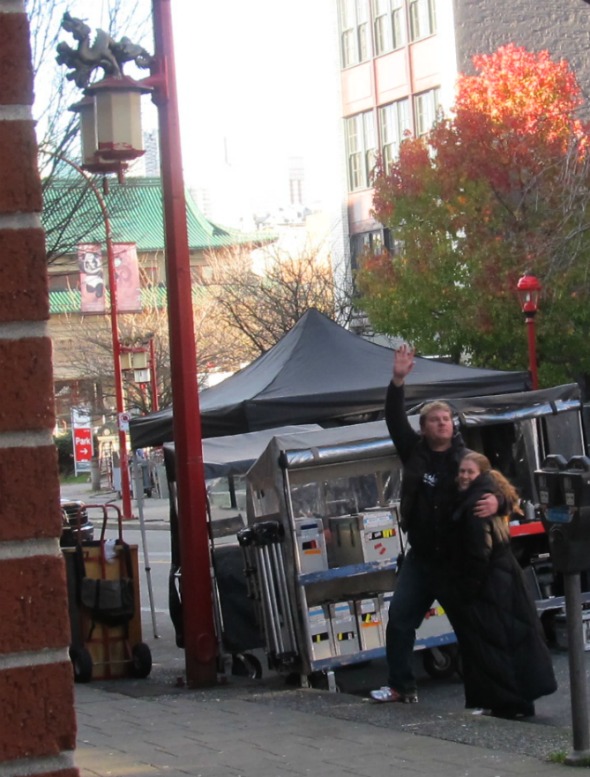 Joel Kinnaman’s conspiracy patsy Stephen Holder goes numb in epic fashion in The Killing’s third episode of the second season: scaring his nephew, beating up one of his old dealers, having sex in a car and then walking through oncoming traffic on what looks like Vancouver’s Georgia Viaduct (the red S on top of the Scotiabank tower is a giveaway).

This is where Mireillie Enos’s Sarah Linden — now back as lead detective on the Rosie Larsen murder case — finds Holder, having spent Day Sixteen of the investigation methodically backtracking what he has done or not done during her brief absence. She asks a uniformed police officer what happened to her warrant for a client list from the Beau Soleil computer servers, the on-line escort service sixteen-year-old Rosie Larsen worked for. It turns out Mark Moses’s new Lieutenant has obstructed her with red tape. While she’s waiting for the warrant, she goes to the Larsen house with a photograph of the manga tattoo from the arm of Rosie Larsen’s mysterious bicycling companion in a video. She’s confronted by a hostile Stan Larsen unwilling to look at anything until the police tell him what they’ve discovered about Rosie’s pink, bedazzled backpack dropped on his doorstep at the end of Day Fourteen.

That brings to Linden to just-retired Lieutenant Oakes’s boat moored somewhere on the Fraser River to retrieve the backpack which Holder entered into evidence. She quickly realizes that this is not Rosie Larsen’s backpack and that Holder must have made a switch, calling him to say: “I know what you did with the backpack…we need to talk..call me back.” Back at the station, she re-watches the video of Rosie Larsen on her bike for the umpteenth time. The uniformed police officer interrupts to tell her that he went to serve her Beau Soleil warrant at the shoe place but there was a fire there that morning.

Sarah Linden gets out of her car at the arsoned shoe store, filmed in Vancouver’s Chinatown early this year, saying, “Seattle PD. Were the computers damaged?” Told there were no computers, she squints around in Linden fashion, spying some security cameras on the street.

This was the first time I’d seen Mireille Enos filming on location for season two. She is so different from her character, quick with a smile and happy in her life, as you can see below in my photograph of her and a crew member.

The next scene in Numb is of Brent Sexton’s Stan Larsen picking up his two boys at school, only to discover that shady crime figure and Larsen’s former boss Janek Kovarsky has been by to visit them. I photographed Brent Sexton in character as Stan Larsen filming this scene at Vancouver’s Lord Strathcona Read More »Going Numb on THE KILLING Day Sixteen