The Holy Shitballs episode, as Arrow star Stephen Amell calls it on Twitter, filmed on location inside the Westin Bayshore Hotel with assassins Deadshot (Michael Rowe) and China White (Kelly Hu) trying to kill Malcolm Merlyn (John Barrowman) at a benefit honouring Merlyn for his work with Starling City. This is where I saw the Dancin’ Merlyn Boys ahead of their scene.

Ummm, people of Starling City. Am I the only one who noticed all those Triad guys dressed up as waiters at your big gala scene last night in the Westin Bayshore Hotel?  Merlyn father-and-son (John Barrowman and Colin Donnell) seemed oblivious to it. Speaking of those Merlyn Boys, is this the best father-and-son casting since those Bishop Boys on Fringe?

Barrowman and Donnell arrived at set together and had such fun rehearsing in their tuxes that they did an impromptu song-and-dance number together up and down the escalator in the Convention Centre. I don’t have photos so you’ll have to trust me that it looked like something out of a Fred Astaire movie. Besides their obvious resemblance, the two men share a theatre background.

In the scene below, Malcolm Merlyn, accompanied by bodyguards, is the recipient of some kind of award. His son Tommy hangs back as his father takes the stage to accept. After a brief speech, Malcolm steps off the stage into the crowd  as the room goes dark, a fire alarm starts flashing orange and the be-jeweled, be-gowned rich folk of Starling City exit the building. What happened? 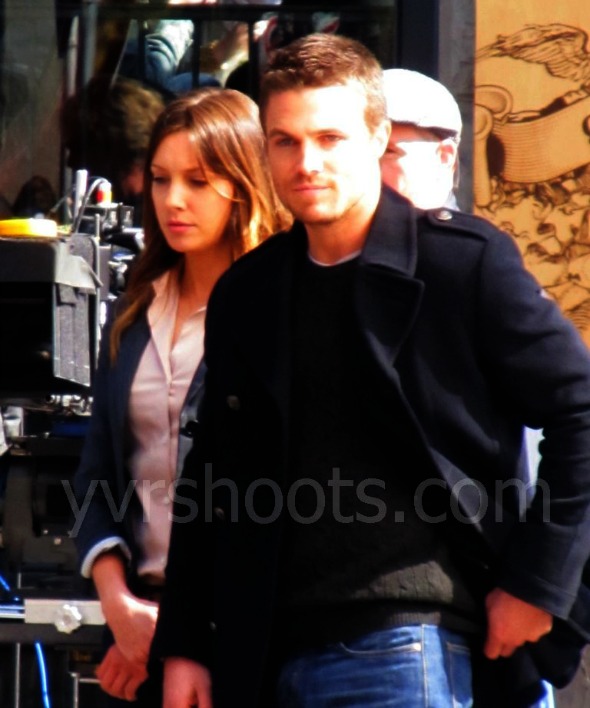