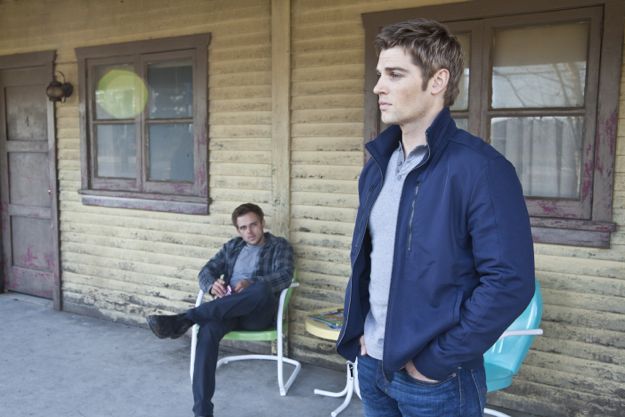 SHOOT: Norma & Deputy Sheriff Shelby Hook Up at BATES MOTEL in Aldergrove for 1×04

Bates Motel has been renewed for a second season.

The one and only time I visited the 12-room motel and gothic house set in Aldergrove last year happened to be the day that Bates Motel filmed Norma’s estranged son Dylan catching her and Deputy Sheriff Zach Shelby coming out of a motel room after a steamy hookup. Since my visit was four months before the show’s premiere, I didn’t know what I was seeing. Now I realize that the motorcycle parked near the motel office belongs to Dylan (Max Thieriot) and the black jeep in the parking lot to Deputy Sheriff Zach Shelby (Mike Vogel). And if I’d got there earlier I might have seen Norma (Vera Farmiga) on set too. Or perhaps she was in the motel room when Mike Vogel came out during a break in filming, crossed the street and walked past me to grab something from the craft tent. Do you remember that scene of Norma and Zach coming out of the motel room from last week’s Trust Me?

Dylan: Hello there Norma. How are those new linens working out for you?

Norma turns to Zach and says: This is my son Dylan. And this is Zack Shelby.

Shelby coolly walks to his black jeep, turns on the ignition and drives away as Dylan smokes and stares from a plastic green chair.

Promotional still from A&E of Dylan and Zach Shelby.