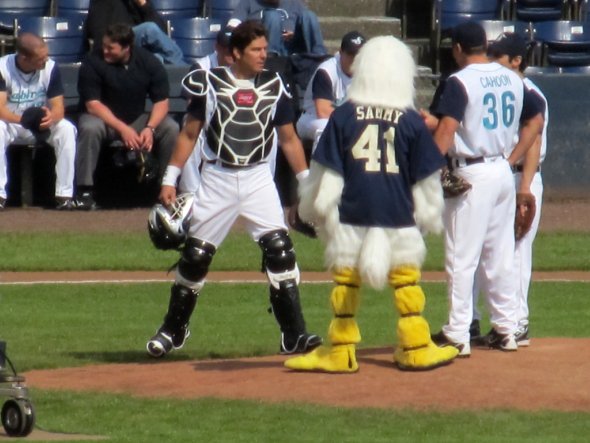 Published June 2, 2011 on Vancouver is Awesome

PSYCH-Os, fans of USA Network comedic-detective series Psych, have been asking when I would return to their show. Since I watched Psych filming its vampire-themed season-six episode in late March, the producers have hosted a parade of guest stars ranging from Clockwork Orange baddie Malcolm McDowell to New Kid on the Block Joey McIntyre to Brat Packer Molly Ringwald and done Darth Vader to Superman to One Flew Over the Cuckoo’s Nest themed episodes in locations as far away as Gibsons Landing. I promised PSYCH-O’s I would try to photograph a rumoured baseball episode if the cast and crew showed up at Vancouver’s baseball mecca — Nat Bailey Stadium.

Through the trees from the grassy slope of Queen Elizabeth Park that morning I could hear the extras, who filled section 1 of the reserved grandstand overlooking first base, shouting at a big white bird mascot