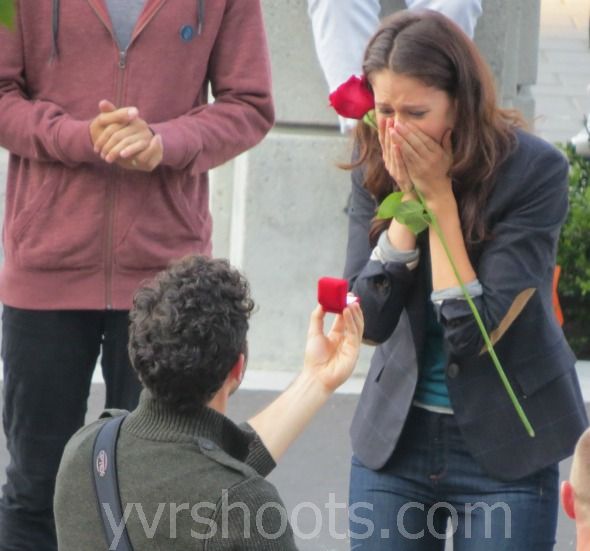 SHOOT: Anna Torv as Fauxlivia & Rowan Longworth as “The Boy” in Coal Harbour for FRINGE 5×12 Liberty

Olivia (Anna Torv) has crossed over to the alternate universe in 2036, using a mega-dose of cortexiphan, to ask an aged Fauxlivia (also Anna Torv) for her help in the plan to rescue “the boy” from a heavily-guarded Observer detention camp on Liberty Island in our universe. Crossing back and forth between universes on the Island, Olivia succeeds in retrieving Michael before dissection and the Liv dopplegangers bring him back on a launch to Battery Park, actually Coal Harbour in downtown Vancouver, where the rest of the Fringe team waits in the blueverse.

SHOOT: Walter’s Window into Another World at Coal Harbour for FRINGE 5×12 Liberty – Updated

In the epic Fringe trailer for this Friday’s two-hour series finale, we catch a glimpse of Dr. Walter Bishop (John Noble)’s cracked Window into Another World circa 1985 (cracked because Walter threw something at it after he saw Observer September interrupt Walternate’s discovery of a cure for his son Peter). Everything is coming full circle in Fringe’s fifth and final season. Walter must have hauled out the window from wherever he’d stored it in his ambered Harvard lab circa 2036 so that the team can have a look at Liberty Island in the parallel universe.

I suspect this will be an early scene of the attempt to infiltrate Liberty Island [to rescue the boy Michael from the detention camp] in the second-to-last episode called Liberty. Peter (Joshua Jackson), Olivia (Anna Torv), Astrid (Jasika Nicole) and Walter arrive in the dark van from last Friday’s episode and park it on the Manhattan shore [at Battery Park] — actually the seawall in Vancouver’s Coal Harbour in front of dozens of Fringe fans. In between takes, you can see good friends Jasika Nicole and Anna Torv crack up laughing.