Supernatural filmed one of its cartoon deaths from this week’s Hunter Heroici on top of the Lumbermen’s Building in downtown Vancouver two months ago. The guest actor below committed cartoon suicide by stepping off the ledge but not falling right away. He stands for a few moments in mid-air above Richards Street, long enough to exclaim, “It’s a miracle. God wants me to live”, and then suddenly drops in a cartoon whoosh.

I waited until the episode aired to post these photographs because I couldn’t figure out what I saw in this scene. And I still don’t know how they filmed it. I assume there was a green screen on the roof as our cartoon suicide acted as if he was in mid-air and then fell to the street below.

Tonight a light high on a hoist above Cambie Street in Gastown lit up the alley that runs diagonally to West Cordova where two 1950s era vehicles were parked. Add smoke machines and a strobe light to simulate lightning and it looks like we have the setting for a Cary Grant-style cult member named Henry to travel from 1958 to 2013 when episode 8×12 — As Time Goes By — will air. Supernatural crew added the Arlene’s Golden Comb beauty salon neon sign to the alley for the night shoot.

Debonair and charming, Henry is said to be a rookie member of an anti-demonic cult who hurtles through the time portal, followed by a Katherine Hepburn-style dame named Josie Sands. I didn’t see who was cast in either of  these roles tonight.  [SPOILER UPDATE: HuffPost TV reports that Gil McKinney is Henry who happens to be Sam and Dean’s grandfather on their father John’s side. And Alaina Huffman was spotted in Vancouver for her role as the demon Abbadon in the body of Josie Sands.]

But the Impala was parked in the same alley this morning for the day shoot, implying Jared Padalecki’s Sam and Jensen Ackles’s Dean Winchester were two of the three actors talking while standing by the same large door our time traveller entered in the night shoot. Unfortunately this scene was hidden behind scrims.

In between the morning and night shoots in the alley, Supernatural filmed inside The Cambie Pub on the corner. 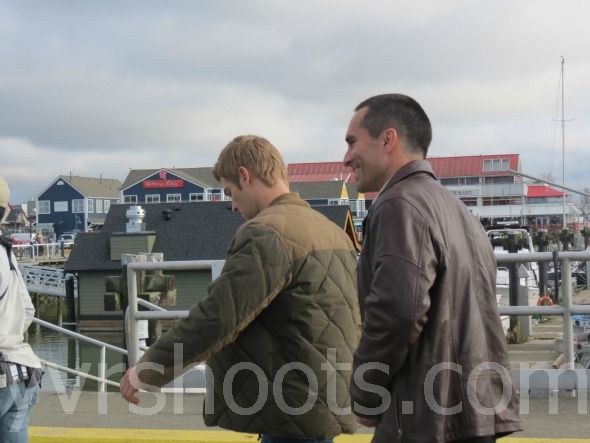 Updated April 8, 2013 – In 1×04 Trust Me, the Sheriff & Deputy Sheriff are called to the docks where a fisherman has found murdered Keith Summers’s hand in his net.

So it’s not surprising that Lost fan favourite Nestor Carbonell (who still gets asked if he wears eyeliner) is on board as the Sinister Sheriff. When I spotted White Pine Bay County Sheriff cars on the Steveston docks I hoped that Carbonell would be on set. Other sheriff staff walked up from the fishing boat where Bates Motel was filming but no Sinister one until the end. Carbonell’s Sheriff [Alex Romero] and Mike Vogel’s deputy Sheriff [Zack Shelby] left after the final scene on the docks. As Carbonell walked by me I asked him why he was Sinister and got a laugh and a smile but no details. 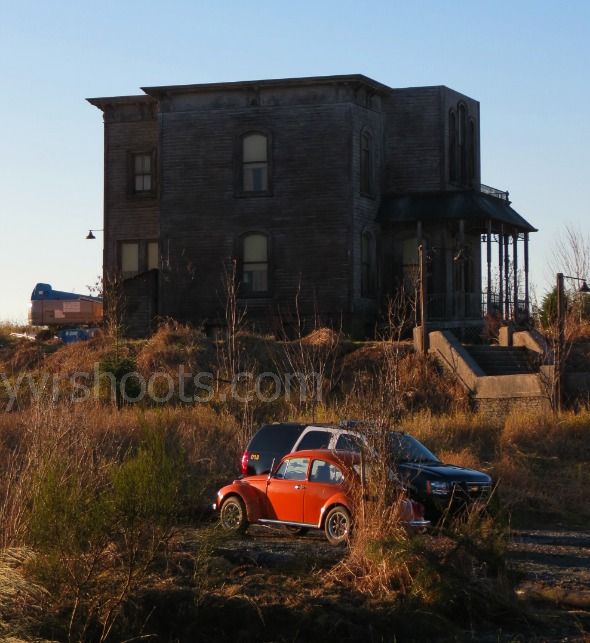 The Bates Motel set out in Aldergrove on 272nd Street near the U.S. border is the spitting image of the motel set in Alfred Hitchcock’s horror classic Psycho, except for the missing top of the Bates house which will be CGIed in post-production. When I arrived mid-afternoon to see A&E’s upcoming series filming, only Mike Vogel’s deputy Sheriff seemed to be inside one of the motel rooms. When he crossed the road from set on his way to craft services I apologized for misidentifying him in yesterday’s blogpost about the Steveston shoot on the fishing boat.

If I’d stayed in Aldergrove I could have seen the Bates house on the hill lit up for a night shoot by a light on a hoist near 272nd Street and a balloon light in the garden  It would have looked scary as hell but I had to start heading back to Vancouver. This set is such a long way out that this will have to be my one and only visit unfortunately.

A&E’s contemporary Psycho prequel Bates Motel  focuses on a younger version of Psycho movie killer Norman Bates (Freddie Highmore) in present-day Oregon and explores his relationship with his unhinged mother (Vera Farmiga) as he approaches his evil destiny.  Lost co-showrunner Carlton Cuse penned most of the 10 episodes which are  described as a cross between Twin Peaks and Smallville.

[Update: At the start of filming the motel sign was Seafairer Motel as in the original Psycho but changed to Bates Motel once this reimagined Bates mother and son bought it] 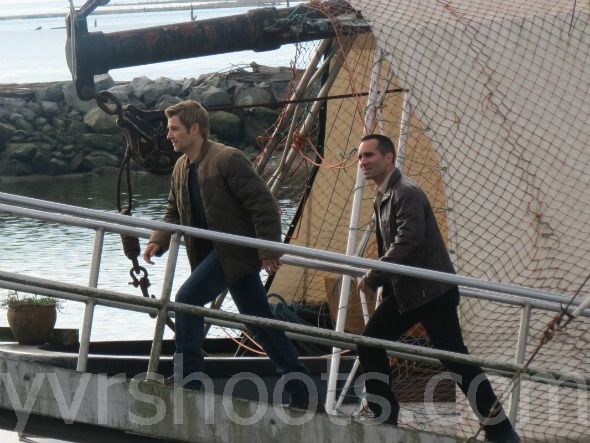 Tonight on hospital dramedy Emily Owens M.D., Emily (Mamie Gummer) vies with her high-school nemesis Cassandra (Naomi King’) to be Dr. Bandari’s research assistant and to stop Cassandra from getting more time with Emily’s crush Will (Justin Hartley) in episode four. But will it work? Cassandra will do anything in her pursuit of Will and seems to be succeeding, as we see from a scene for upcoming episode eleven filmed last week at the University of British Columbia’s Life Sciences Centre dressed as Denver Memorial Hospital.

Emily Owens M.D. crew filmed a tracking shot last Thursday of Emily and her friend Tyra (Kelly McCreary), the lesbian daughter of the chief of surgery, standing in line at the prop Get Your Fix coffee cart as background performers carried floral arrangements from the prop Kiss and a Rose flower company van into the Life Sciences Centre, where other crew was setting up a gala set in the atrium. Emily and Tyra are joined in line by Cassandara and Will, also carrying garment bags. So of the main cast, I got a chance to see everyone on location but surgical resident Dr. Mica Barnes (Michael Rady) and rock star surgeon Dr. Gina Bandari (Necar Zadegan). If I’d stayed for the night shoot inside the atrium of the Life Sciences Centre, I might have seen the cast all dressed up to film the hospital gala scenes but hopefully will get the chance to see it on screen.

PHOTO RECAP: Vancouver as Vancouver in ONCE UPON A TIME 2×06

A few thoughts on Tallahassee, my favourite Once Upon a Time episode of season two so far. I predicted a long con of Jennifer Morrison’s young Emma Swan by Michael Raymond-James’s fellow thief Neal Cassady but did not anticipate he would do it out of love for her after Eion Bailey’s August showed him Emma’s destiny to break the curse in Storybrooke.

I’d seen the thieving pair on set in the Downtown Eastside near the Main Street overpass filming the scene of them being pulled over by the Portland police after Emma learns she “stole a stolen car.”

Once Upon a Time filmed later scenes of the new “Bonnie & Clyde” examining their stolen loot from a corner store  in a motel room at the City Centre Motor Hotel on Main Street and then planning to make a real home together in Tallahassee.

Read More »PHOTO RECAP: Vancouver as Vancouver in ONCE UPON A TIME 2×06

Here’s the Blueberry and James Roday’s Shawn Spencer and Dule Hill’s Burton “Gus” Guster filming inside it in North Vancouver rain this Halloween day. Psych wraps filming of its seventh season tomorrow. So I was lucky to see the Blueberry scenes and then Shawn and Gus grabbing a whole mess of hot dogs from Santa Barbara’s Footlong and Fancy Free truck as another character drove by flashing a cardboard sign at them which read “Suck It”. No idea why but it looks like it will be fun.