When a small plane crashes in the middle of the Canadian wilderness, Manhattan attorney Liv (Melissa Barrera) must battle the elements and odds to survive.

This is gonna be a crazy ride. Can’t wait for y’all to see — Melissa Barrera.

Keep Breathing filmed last summer in B.C. under the working title Breathe, with downtown Vancouver as NYC where Liv works as a “cut-throat” Manhattan lawyer and a month-long shoot in Whistler Olympic Park last July as the wilderness where Liv’s plane crashes.

Production built a plane replica inside the Rollerland building at the PNE.

Melissa Barrera did some water stunts on the Cheakamus River  in Whistler last August.

She brought Walter to stay warm between takes.

With her stand-ins at the last location.

Melissa Barrera starred in In the Heights. 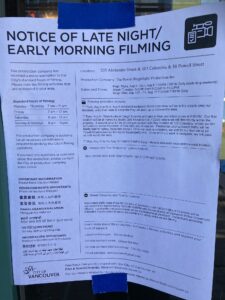