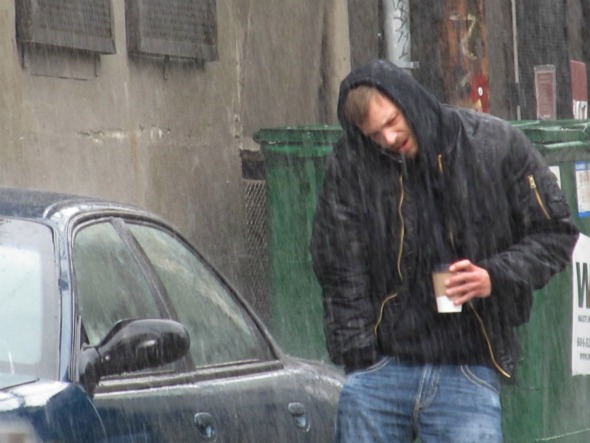 Published June 18, 2012 on Vancouver is Awesome

After a two-season investigation into the murder of Seattle teen Rosie Larsen, The Killing finally revealed who did it on last night’s season finale. Our dynamic detective duo Sarah Linden and Stephen Holder had a tough time of it in the second season as they closed in on the killer: starting with Joel Kinnaman’s Holder finding out he’d been set up to frame Seattle mayoral candidate Darren Richond with a doctored toll booth photo and then getting beat up by thugs at the Wapi Eagle casino and left for dead, while Mireille Enos’s Linden ditched her fiance, was suspended, lost custody of her son, got bashed on the head at the casino and committed to a psych ward for a day.

On the lam from their own Seattle police force, Linden & Holder strike an on-the-spot deal with Mayor Lesley Adams on Day 24 of the investigation to let them pursue two suspects (whom Holder dubbed “Donny and Marie”) from the rival Richmond campaign: campaign manager Jamie Wright and campaign adviser Gwen Eaton. After an interview with Wright’s grandfather, Kinnaman’s Holder is subjected to one more indignity while walking back to his beater car in an alley off Victory Square. The dreaded Vancouver rain tower.

Of course it wouldn’t be The Killing if the leads didn’t get completely soaked from time to time but I bet Joel Kinnaman regrets joking to EW magazine last year that one of the privileges of going to Swedish acting school is doing two months of rain tower. He was doused in take after take by a spectacular deluge, so spectacular I had to strip out some of the fake rain from my photographs so that you could see him.

Yet the second season has been nowhere near as damp or morose as the first thanks to Kinnaman’s Holder, who has single-handedly turned The Killing from a dead serious drama into an occasional dramedy. Apart from last night’s finale of course, which turned out to be nothing but sombre for Linden & Holder. Don’t read any further if you don’t want to know who killed Rosie Larsen.

of the investigation when the motormouth provided a distractionRead More »BIG READ: THE KILLING Reveals Who Killed Rosie Larsen

On Day 24 of the investigation into the murder of Seattle teen Rosie Larsen, the detective and political storylines intersect. At a downtown government building, Darren… Read More »THE KILLING Films at Vancouver Public Libary on Day 24 of Investigation – Updated 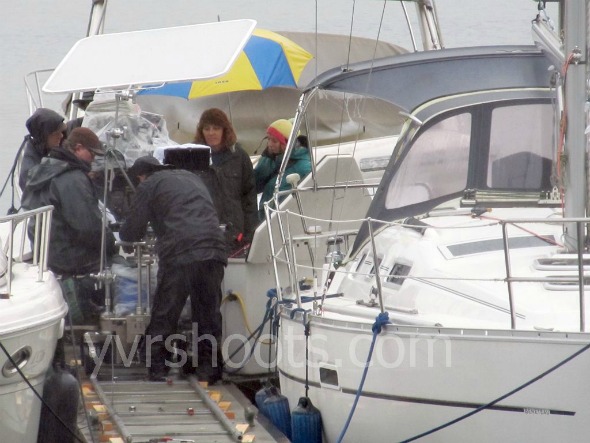 THE KILLING – Recap of Days Seventeen to Nineteen of the Investigation

Linden & Holder. The dynamic detective duo are back together for days seventeen to nineteen of The Killing investigation into the death of Seattle teenager Rosie Larsen. And it’s wonderful to watch and listen to them. I got to see quite a bit of Mireille Enos and Joel Kinnaman filming these scenes inside lead homicide detective Sarah Linden’s silver car in various spots around Vancouver-as-Seattle’s downtown and downtown eastside, but couldn’t hear any of their often funny dialogue.

Day Sixteen ends with Linden & Holder staking out the Larsen residence and Holder attempting to explain his actions to her: “Linden, I thought the [Darren] Richmond photo was legit. Kay. I mean Gil saved my life. I had 10 days in when I met him.” Linden is having none of it: “I don’t care. We’re in the middle of a shit storm because of you.” They follow an S.A. Larsen truck to Janek’s restaurant. Holder points out they’re not Stan Larsen’s guys: “They don’t got the overalls.”

The next day, the detective duo meet up with a mob expert with the FBI, who shows them a photo of the body of a man hands-bound with a single shot to his head in the trunk of a car and tells them that it was Stan Larsen who whacked him. Back at the police station, it’s another fun food conversation with Linden asking Holder: “Mmmmm is that bacon?” He replies: “Nah this is ham, eggs and sausage.” Linden: “What happened your whole lacto ova vegan thing?” Holder: “Nothing. I’m just ready to embrace meat again.” And then after a while, Holder brainstorms: “Maybe Rosie’s BFF knows about tattoo boy?”

After first stopping in to see the widow of the man killed by Stan Larsen, Linden & Holder go to Rosie’s school to ask her BFF, played by Vancouver’s own Kacey Rohl, what she knows about the Boy with the Manga Tattoo. She confirms seeing this boy hanging around Rosie’s place but that’s all.

They go to a juvenile hall to question the tattoo artist and discover the boy was a foster kid, Alexi Giffords, who lived three blocks from the Larsens. And then onto the stakeout scenes I saw being filmed in Strathcona. It was a long one and Holder got on Linden’s nerves to the point she made him get out of the car and left.

I couldn’t help but laugh. He was so Holder: “Yo I gotta piss. So Rosie likes bad boys like her father.” Linden doesn’t buy it but Holder presses on: “It’s in the DNA…sins of the fathers.” Linden: “Did you read that in O magazine?”

Then he teases her about the FBI Mob guy: “Oh snap, Linden rocked a booty call. Dial 1-900-Linden.” Linden replies: “It’s not even enough numbers.”  But when Holder starts pushing her Foster kid buttons she snaps. He reminds her she was a runner in her day and she gives him a warning look but he continues on: “I’m just making conversation since we’re wasting our time anyway.” Linden barks: “You’re right this is a waste of time. Get out!” Holder: “Come on Linden. What am I supposed to do out here?”. Linden: “Your job.” Holder: “Least we’re back to normal.” They are.

Linden goes to see Regi to ask to read a file on an ex-foster kid. The Regi and Linden talking on the dock scenes were filmed in late January at the Quayside Marina in Yaletown. Here are my photographs of Mireille Enos and Annie Corley being battered by wind and rain on their way to set and on set.

Meanwhile Holder is taking a piss when Alexi returns home. He chases him but can’t manage the fence. And Linden gets a peek at the file which tells her Alexi is the son of the man Stan Larsen whacked.

WRAP: THE KILLING’s Drink Menu at the Vancouver Wrap Party

Sounds like The Killing cast and crew had a few too many rounds from the special Drink Menu at last night’s season two wrap party in Vancouver. What… Read More »WRAP: THE KILLING’s Drink Menu at the Vancouver Wrap Party 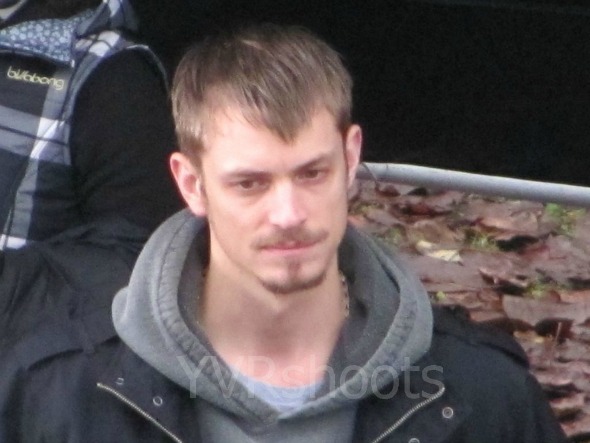 Published June 23, 2011 on Vancouver is Awesome

For reasons I don’t need to explain, I’m no fan of riots, even Twitter riots which are benign with no cars overturned or set on fire. But a Twitter riot is still a mob and a frenzied one at that: spewing F-U tweets at Vancouver-filmed The Killing and capital letter advisories to anyone planning to watch, DON’T DO IT! SAVE YOURSELVES!!! There’s even a web site: f—thekilling.com which says “Dear The Killing: F— you!!! Sincerely, Everyone Who Used to Watch Your Show.”

What set if off? Here come the spoilers. The finale didn’t solve the central mystery and show’s marketed tagline: Who Killed Rosie Larsen? And in a surprise if clumsy twist, it turned detective Stephen Holder, one of the few likable characters, into a seeming villain, who betrayed lead detective Sarah Linden and set up Seattle mayoral candidate Darren Richmond for arrest.

AOL TV critic Maureen Ryan (@MoRyan) pronounced it the “worst finale ever” on Twitter. Really? Ever? She elaborated in her linked review, saying she hated it with the “burning intensity of 10,000 white-hot suns” and held first-time showrunner Veena Sud responsible for not telling viewers who killed Rosie Larsen, turning Holder into a villain and a “number of other stupidly melodramatic, preposterously manipulative things.” She then retroactively called the 13-episode series a “crapfest” and hoped the actors wouldn’t return for a second season. Later she tweeted that it would be smart if AMC withdrew its renewal. It’s stuff like this from many critics as well as countless furious ex-fans which prompted Show Patrol to tweet: “I’m laughing at over-the-top reactions to season finale of [The Killing] as if, um, Veena Sud killed someone. Breathe, folks, breathe.”

Full dislosure: I am not blind to the show’s weaknesses, but won’t join the braying mob. I remain a fan of The Killing, having spent too many hours in real rain watching it film here for four months (while imagining how much worse it was for lead actors Mireille Enos and Joel Kinnaman being hosed with fake rain from the show’s rain towers). There’s more than a little hometown pride involved, even though this is an American series set in Seattle. 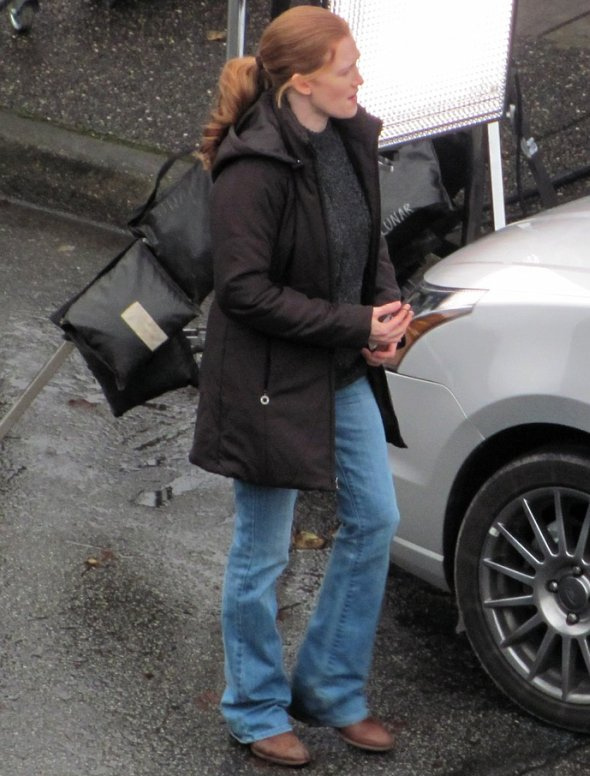