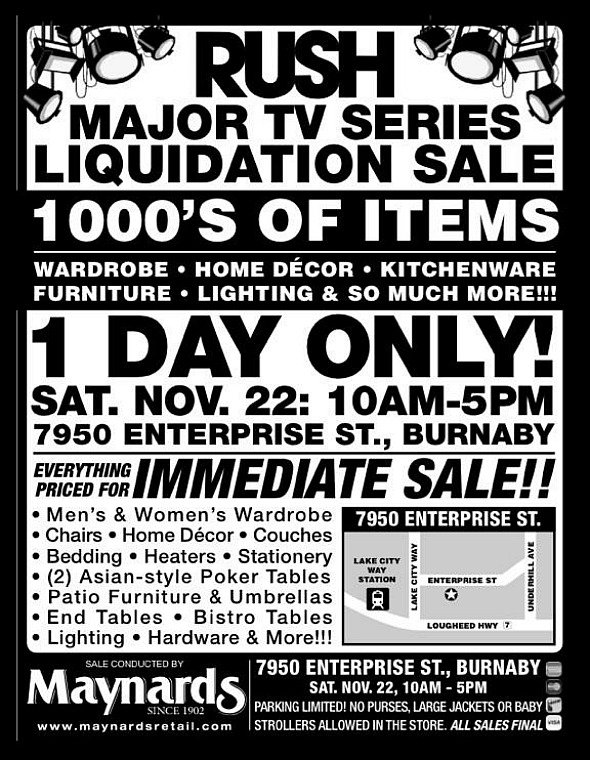 Tom Ellis was well-cast as the freelance physician who drove around L.A. in a vintage Mercedes, making house calls to the wealthy and debauched in exchange… Read More »SET SALE: USA Network Cancels RUSH with Tom Ellis as Renegade Doctor 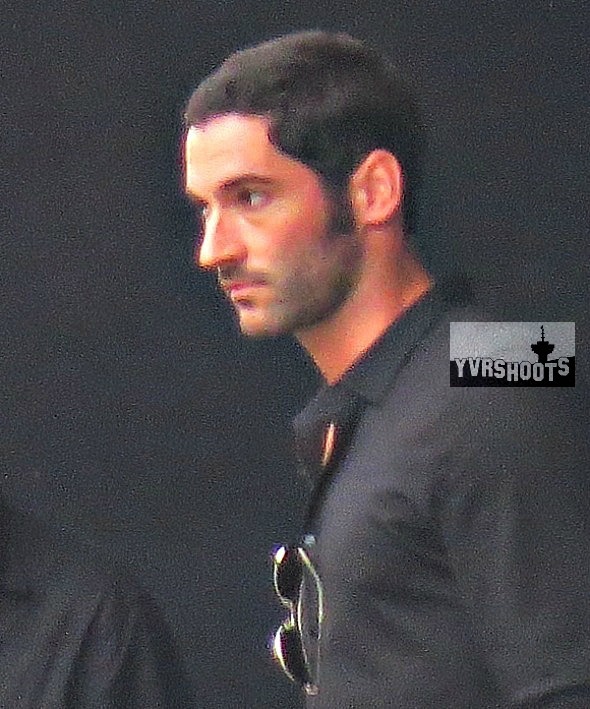 Update: Rush picks up a diamond ring for Sarah in this scene. When You’re The Best Doctor Money Can Buy. You Need To Make Sure… Read More »SHOOT: RUSH Season Finale with Tom Ellis & Mercedes in South False Creek

When You’re The Best Doctor Money Can Buy. You Need To Make Sure You Don’t Sell Your Soul. The new USA Network series Rush about… Read More »NEW SERIES: USA Network Series RUSH with Tom Ellis Expected to Start Filming May 21st 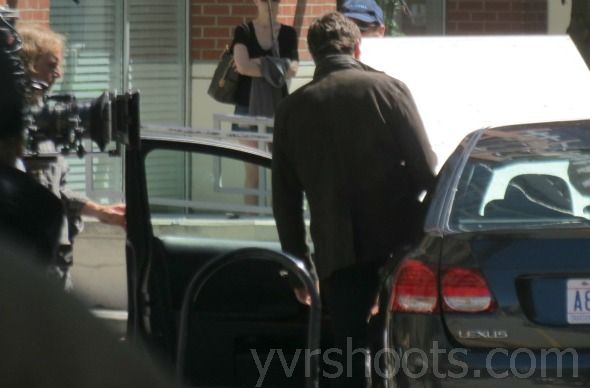 King & Maxwell filmed a big scene in Chinatown yesterday of secret-service-agent-turned-private-investigator Sean King (Jon Tenney) driving north on Taylor Street when a “bad guy” in a truck speeds out of Shanghai Alley and rams him.  I dropped by in the afternoon when crew shot King (Jon Tenney) rolling out of the front seat and hitting the ground as the “bad guy” fired multiple rounds from his machine gun into the back seat of King’s Lexus, where he expected to find a key witness. Guess he missed the old switcheroo.  Later in the early evening,  crew filmed close-ups of the “bad guy” opening the door to find a dummy riddled with bullet holes — not the witness. Score: King 1. Bad Guy 0. King and his partner secret-service-agent-turned-private-investigator Michelle Maxwell (Rebecca Romijn) then came round behind the “bad guy” and arrested him.

King & Maxwell wraps filming of its first season of ten episodes this week in Vancouver. 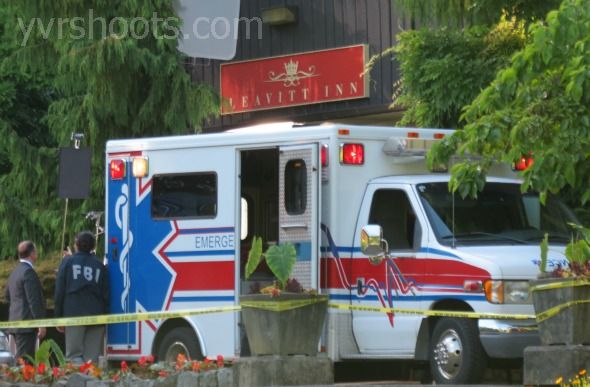 King & Maxwell crew turned the Stanley Park Pavilion into the Leavitt Inn, the site of an attempted assassination at a Washington D.C. press conference. Today was the day for all the exterior scenes including one on the other side of former secret service agent Michelle Maxwell (Rebecca Romijn) coming around the side of a prop catering van with her gun extended after shots are fired. Crew called out “Bang Bang” as a signal for the background performers to scatter on each take. Tomorrow production moves inside for gunfire scenes in the ballroom and maintenance tunnel. Catherine Bell is guest-starring in this episode, one of several this season, but I haven’t heard how her character fits in. 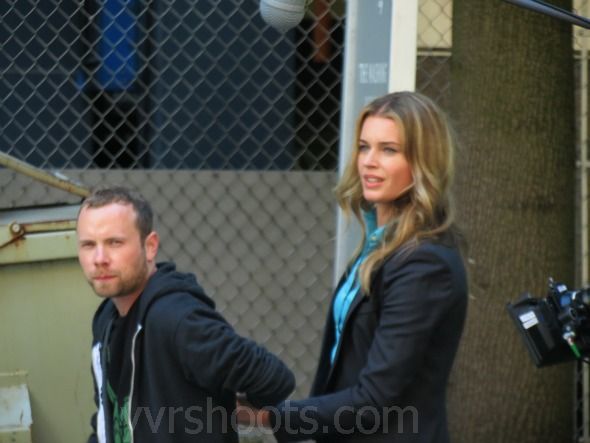 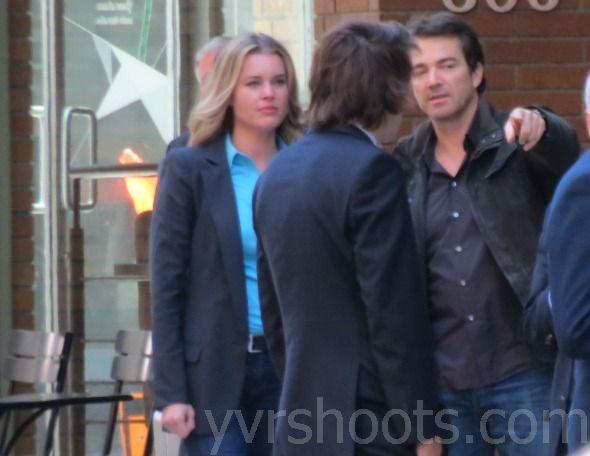 King & Maxwell debuts on TNT tonight. And today’s shoot in downtown Vancouver couldn’t have been more public or open. To transform the 800 block of  West Hastings into Washington, D.C., crew changed signage, parked yellow Dulle International Airport cabs outside the Terminal City Club and dotted both sidewalks with well-dressed backgrounders for scenes of secret-service-agents-turned-private-investigators Sean King (Jon Tenney) and Michelle Maxwell (Rebecca Romijn) in a foot chase filmed by a camera on a golf cart. It took place on both sides of West Hastings and ended in an alley east of the CIBC Tower. I only caught two running takes. The first with both King and Maxwell, where former Olympic athlete Maxwell (Romijn) outruns her partner (Tenney), and the second with King on his own.

Secret service agents turned private investigators Sean King (Jon Tenney) and Michelle Maxwell (Rebecca Romijn) are the leads in the upcoming TNT series King & Maxwell, based on popular characters from best-selling author David Baldacci. In the episode filmed this week, the pair investigate an explosion at a Washington, D.C. eatery. One which impacts King nearby.

King & Maxwell crew spent five days at Incendio in Gastown this week either preparing or filming before-and-after-explosion scenes. They did everything but the SPFX explosion itself, which had been filmed two years before for the CW pilot Heavenly, which was not picked up to series. All King & Maxwell had to do is match the original set dressing on the patio.

And then distress the windows for the aftermath of this SPFX explosion and cover the pavement in debris.

In scenes filmed Monday, Sean King (Jon Tenney) drove up to the Italian restaurant just as it explodes.

And in yesterday’s scenes, an upset Michelle Maxwell (Rebecca Romijn) rushes to her partner.  “Sean,” she cries as she walks towards him standing in the debris.

Two years ago TV pilot Heavenly blew out the windows of Gastown’s Incendio restaurant in a controlled explosion.

I hoped for a repeat performance today from upcoming TNT series King & Maxwell, but it was not to be. Instead I watched as Washington, D.C. secret-service-agent-turned-private-investigator Sean King (Jon Tenney) drove up in his Lexus to park opposite Incendio, got out of his car talking on his phone and then ducked on cue. I assume he ducked from an explosion that will be added because he did it in take after take and tomorrow crew will dress the street with  post-explosion debris to film on Wednesday.

Upcoming TNT series King & Maxwell filmed in and around the Ivanhoe Hotel on Main Street last week with Sean King (Jon Tenney from The Closer) and Michelle Maxwell (Rebecca Romijn from The X-Men franchise)  arriving at a Washington, D.C. crime scene on Station Street behind the hotel. And then moved into Pacific Central station to film more scenes.