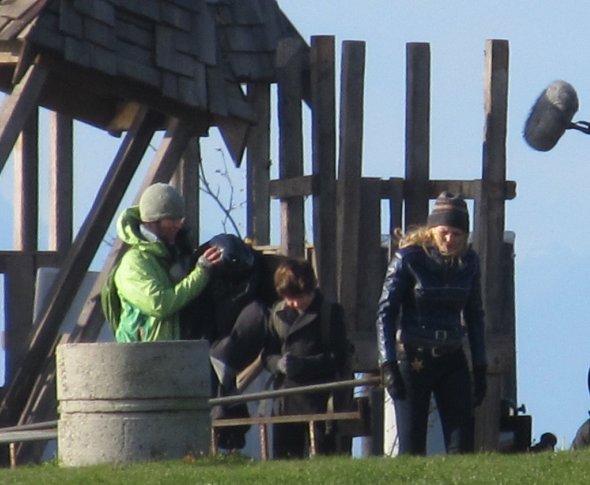 BIG READ: ONCE UPON A TIME is Fall TV’s Biggest New Drama Hit

Published December 9, 2011 on Vancouver is Awesome

Modern fairy tale series Once Upon a Time is American TV’s biggest new fall drama, putting the fictional town of Storybrooke, Maine, on the map. Normally played by Moncton Street in the village of Steveston, pieces of Storybrooke can pop up anywhere in the Vancouver area from Fort Langley to New Westminster to North Vancouver. For its October 23rd debut, the freshman show commanded an amazing 13 million American viewers and the next three episodes stayed steady at 11 milliion. On the American Thanksgiving weekend, an episode held its own against Sunday night football. And while last Sunday’s Prince Charming episode marked a series low, the hashtag #OnceUponaTime topped worldwide trending on Twitter during the broadcast. So it’s much more than a family show — the 18-49 demos are great too. Tune in this Sunday for the Fall Finale.

Created by Lost writers Eddy Kitsis and Adam Horowitz, Once Upon a Time airs on ABC, whose Disney parent company owns the rights to most of the world’s fairy tales. That’s essential since the show mixes reality and fantasy from present-day-but-frozen-in-time Storybrooke to flashbacks of a fairy tale world lost when the Evil Queen cursed all the fairy tale characters to spend their lives in the real world without getting happy endings or even knowing their true identities. Prince Charming (Josh Dallas of Thor) and Snow White (Ginnifer Goodwin of Big Love)’s daughter Emma Swan (Jennifer Morrison of House) has grown up in the real world without knowing her fairy tale parents. When Henry (Jared Gilmore), the son Emma gave up for adoption a decade earlier, finds her and begs her to come back with him to Storybrooke to break the curse. things start to change — but not too quickly we hope.

In a delicious twist, the Evil Queen happens to be Henry’s adoptive mother and Storybrooke mayor Regina (Lana Parrilla) in the real world, someone who does not want Henry’s real mother in town at all. I have watched a few Regina vs Emma confrontations being filmed already, the latest in an epic windstorm at Garry’s Point in Steveston last month. Henry’s castle had been damaged and I’m not alone in suspecting Regina is behind it. Be warned: there are mild to medium spoilers throughout this post.

I wrote about the filming of the Once Upon a Time pilot and Evil Queen-centric second episode for my YVRShoots series in the summer. I’ve since learned more about how the fairy tale world scenes are created using revolutionary Z.E.U.S. visual effects technology. If you looked through the camera lense or on the director/producer monitors during filming of the wedding of Prince Charming to Snow White in the pilot, you’d have seen a detailed ballroom wedding scene rendered in real time while elaborately-costumed Josh Dallas and Ginnifer Goodwin performed on a mostly empty green screen stage with costumed extras. Read More »BIG READ: ONCE UPON A TIME is Fall TV’s Biggest New Drama Hit 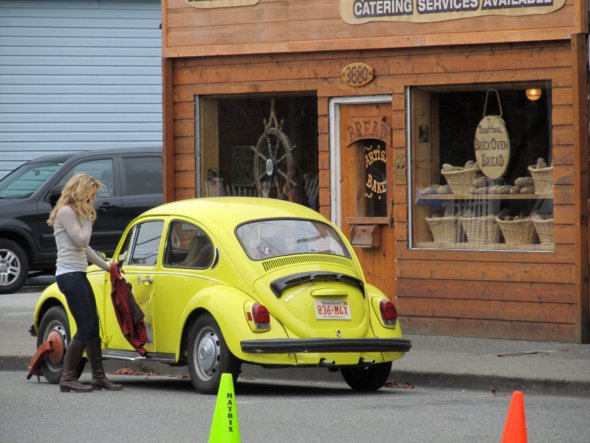 BIG READ: ONCE UPON A TIME in Steveston Village

Published August 5, 2011 on Vancouver is Awesome

New American TV series Once Upon a Time is about two worlds: one set in fairy tales and another set in a New England town, with the more-than-100-years-old Steveston village standing in for Storybrooke, Maine. On Monday night last week, crew transformed Moncton Street in Steveston for filming the next day: boarding up and plastering newspapers on the windows of Nikka Fishing & Marine to make it look like a derelict Storybrooke Free Public Library; putting their own weathered signage like Storybrooke Hardware and Paint over Steveston Marine & Hardware on the side of a building; and erecting several other dirtied-up signs like Purbeck Shoe Store on the Steveston Drugs brick heritage building. This was all done to film scenes of Once Upon a Time lead Jennifer Morrsion (Cameron of House) walking on the boardwalks and crossing back and forth across Moncton Street for the second episode of the series.

The magical story of Once Upon a Time apparently begins in the pilot with the grand wedding of Prince Charming, played by Josh Dallas (Thor), and Snow White, played by Ginnifer Goodwin (Big Love), in a distant fairy tale world — filmed this spring in Vancouver with greenscreens and 200-plus fairy tale costumed extras. Meantime, in the world of present-day reality their daughter Emma Swan, played by Jennifer Morrison, has grown up without knowing her fairy tale parents, which goes a long way to explaining her profession as a kick-ass bail bonds collector in Boston. Things change when Henry, the son Emma gave up for adoption a decade earlier, finds her and begs her to come back with him to Storybrooke where he says fairy tale characters have been cursed to spend their lives in the real world without getting happy endings or even knowing their true identities. She drives there with Henry, played by Jared Gilmore (Bobby on Mad Men), in her yellow VW bug, where she meets some strangely familiar people and decides to stay awhile.

No one outside of production caught a glimpse of Once Upon a Time filming the fairy tale world scenes of the pilot, but a small crowd of people did watch Jennifer Morrison do a yellow-VW-bug-driving-scene on Seymour Street downtown in late March and then in early April, a smaller crowd watched her yellow-VW-bug arrival in Steveston as Storybrooke.

Created by Lost writers Eddy Kitsis and Adam Horowitz, Once Upon a Time should know how to mix reality and fantasy and cross between the two. The pilot cuts back and forth between the present world of Storybrooke and the past world of the Enchanted Forest Read More »BIG READ: ONCE UPON A TIME in Steveston Village